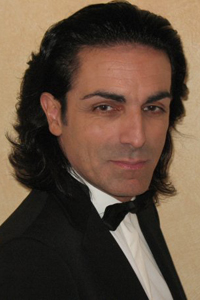 Marco Ciccone was born in 1960 in Rome. He began to study music when he was five years old and took his own diploma as pianist with Gloria Lanni with the best marks and congratulations. He obtained also degrees as orchestra conductor with Daniele Paris, as composer with Giampaolo Chiti, Roman Vlad and Teresa Procaccini. Besides he has studied organ with Giuseppe Agostini and chamber music with Luciano Cerroni.

After his piano diploma he attended various masterclasses held by Gloria Lanni and Massimiliano Damerini.

He got the third prize at the ?Concorso nazionale di esecuzione pianistica di Pescara?, won the ?Bela Bartók competition? of twentieth century and was one of the winners of the ?Selezione giovani concertisti di Castel S. Angelo?.

He has performed Mozart?s Piano Concerto K 449, Bartók?s Sonata for two pianos and percussion and the Stravinsky’s Concerto for piano and winds instruments.

He has performed many pieces of contemporary composers and recorded some of these for RAI (Italian national radio and television). He has recorded as pianist the CD ?Putraddipé? performing works written by composers of Abruzzo (Italy) and all piano pieces of the French composer Patrice Fouillaud.

Because of his wide musical interest, that goes beyond playing, he has also done some transcriptions and arrangements. His orchestration of the Creston?s Sonata op.19 for saxophone and piano (he has directed the first performance) was performed in Turkey and the U.S.A. and was chosen for the final concert of the 55th Annual Young Artists Competition (Quincy, Illinois ? U.S.A.). He has been teacher at the Arts Academy in Rome and at the Accademia Musicale Pescarese in Pescara; since 1984 he teaches in Italian conservatories.