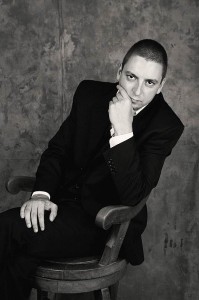 The ideal combination of intellect, technique and passion, refinement of touch, perfect technique, concentration and control, exceptional dynamic potential, original ideas and unconventional interpretations’ give Ratimir Martinovic’, by the critics’ words, one of the leading places among pianists of the younger generation.

Born in Kotor, he graduated in 1999 from the class of Kemal Gekic’ at the Academy of Arts in Novi Sad, playing in one night Bach’s ‘Goldberg Variations’, Beethoven’s ‘Hammerklavier Sonata’, Chopin’s Four Ballades, and Prokofiev’s ‘Toccata’, to great critical aclaim. He received his Masters degree, playing an all Bach program.

At present, Martinovic’ works as Associate professor at the Academy of Arts, as the youngest piano professor and serves as the head of piano department. He has had advanced studies with well-known pedagogues and pianists such as Ivo Pogorelich, Karl-Heinz Kammerling, Hiroko Nakamura, Jacques Rouvier, Arie Vardi, Sergio Perticaroli and many others.

Martinovic’ has recorded two CDs with the works by Bach/Tausing, Mozart, Chopin, Brahms, Prokofiev and Bach’s ‘Goldberg variations’. He is the winner of many domestic and international awards and tributes. After initial successes in piano competitions at very early age, Ratimir Martinovic’ withdrew from the competition scene, devoting his time to playing concerts and teaching. He is one of the founders and Music director of International Festival Kotor Art and founder and member of the Kotor art Trio.