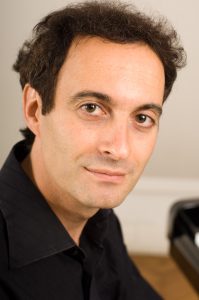 Critics from around the world (Postdate Nachrichten, Fanfare, New York at Carnegie Hall Concert reviews, Musica, consider Gianluca Luisi one of the most interesting Italian pianists of our time. His performances have received enthusiastic acclaim in many places of the world.

In Italy, he graduated with honors from the Conservatory of Pesaro; studied at the Incontri col Maestro International Academy in Imola and with Aldo Ciccolini in Naples and Paris.

Gianluca Luisi has performed in prestigious halls and important venues, such as the Musikverein in Vienna, Carnegie Hall in New York City, Bellini Teather in Catania, at the San Carlo in Naples, the Schleswig- Holstein Musik Festival (Hamburg), in the Mozart Saal at the Bachakademie in Stuttgart, the Bach Festival in Leipzig, Bösendorfer Hall in Vienna, the Music Festival of the Saarland, in Weiden and Sulzbach for Meisterkonzerte, in Bauman Auditorium in Newberg (USA) and many other U.S. cities (Washington, New York, Las Vegas, Minneapolis, Cleveland, Lower Columbia College in Washington), as well as other places in Europe (Malta, Porto, Oslo, Helsinki, Berlin, Neuhardenberg, Frankfurt).

Among the extensive selections of his repertoire are the complete Well-Tempered Clavier by J.S. Bach, a work he has performed countless times from memory, receiving enthusiastic acclaim from international critics and one he recorded for the American label Centaur. Fanfare and American Record Guide described his recording as an absolute reference with the historic atmosphere of Edwin Fischer; the magazine “Piano News” (Düsseldorf) rated Gianluca’s recording 6 out of 6 stars for the quality of his interpretation.

Gianluca has made 26 recordings, some of them are devoted to unusual repertoire, including unpublished works and world premieres. He has taken part in the complete recording project of the Gradus ad Parnassum by Clementi and has issued a CD dedicated to Liszt with the Years of Pilgrimage, Italy (also for Centaur). Two additional CDs that have received accolades from critics, include the Quintet written by G. Onslow and Chopin Piano Concertos with the Ensemble Concertant Frankfurt for Dabringhaus und Grimm (MDG). For Naxos International Gianluca recorded 1 CD with music by F. Liszt, two CD’s with chamber compositions of L.Thuille (including the complete works for violin and piano with violinist Marco Rogliano), two CDs with the complete set of the 100 J.B.Cramer Etudes.