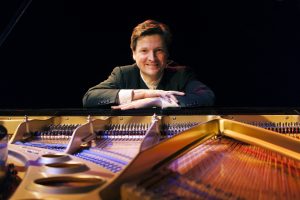 The 54-years old pianist studied under Professor Eliza Hansen and Christoph Eschenbach at the Hamburg Musikhochschule. His break-through to active international concert playing came in a tour with Leonard Bernstein in summer 1989. The world- famous director said about Christoph Soldan: “I am impressed by the soulful size of this young musician.“ Since then, Soldan has played in numerous tours with renowned orchestras across Europe and overseas. In particular, this can be seen in the CD recordings of all of Mozart piano concertos, which were performed and recorded from 1996 until 2006. A tour of piano evenings took place in Mexico and other countries in Central America in October 1997. In August 1998 he debuted in Salzburg and in the Chamber Music Hall of the Berlin Philharmonic, and in May 1999 in the Leipzig Gewandhaus. In March 2000, there were three piano evenings in Japan. So far, there have been radio and television productions with the Hessische Rundfunk, Frankfurt, Deutschlandfunk, SWR, ORF and ZDF. The Bayerische Rundfunk broadcasted his piano evening in the Munich Residenz in October 1998 and his concert in the Bad Brückenau Music Festival live in 1999. Radio Bremen broadcast his recital in Bremen in August 2002. He performed all 27 piano concertos by Mozart together with the Slovak Chamber Orchestra CAPPELLA ISTROPOLITANA, the chamber orchestra of Pforzheim and the Silesian Chamber Orchestra Katowice within the years 1996 and 2006. As a big final he performed the concertos for 2 and 3 pianos.

Christoph Soldan developed a “pas de deux for piano and dance”, together with his wife, dancer and choreographer Stefanie Goes. Their première took place in Stuttgart in May 2000. In Spring 2001 he performed during the Prague Spring Festival accompanied by the Slovak Chamber Orchestra “Cappella Istropolitana”. Two recitals in Hamburg and Berlin were followed by the live recording of two Mozart piano concertos in the medieval monastery of Maulbronn in September 2002. In January 2004 the première of the new dance project “something about humans and angels” took place in Stuttgart followed by tour to South Africa. Since 2007 Soldan has been working also as a conductor when performing piano concertos by Bach and Mozart.

In the next season Christoph Soldan will perform in Germany, Italy, Spain, Austria, and Slovakia with various programmes such as recitals, children concerts, as a soloist with 5 of Mozart’s piano concertos, concertos by Schumann, Chopin, Beethoven, Mendelssohn double concerto and also as a chamber musician – Brahms Piano Quintet Op. 34 and Schubert “Trout” Quintet.  The German press describes Christoph Soldan as an artist personality who works with the spiritual intensity and soulful dimension of a music piece, rather than giving a purely technical virtuoso performance.