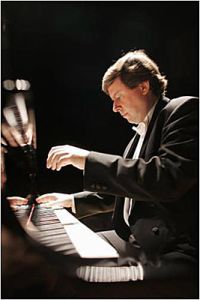 Krzysztof Jabłoński was born in 1965 in Wroclaw, Poland. He started piano lessons at age six with Professor Janina Butor. Under her guidance he won many prizes at piano competitions in Poland and performed his first concert with an orchestra at the age of 12. As the youngest competitor at age of 15, he placed fifth at the Milan Piano Competition, “Premio Dino Ciani”. Chairman of the Jury Nikita Magaloff then invited Mr. Jabłoński to attend his Master Classes in Geneva, Switzerland. Between 1983 and 1986 he studied under the guidance of Professor Andrzej Jasiński at the Academy of Music in Katowice, Poland. He graduated with honors in 1987, and in 1996 he earned his Ph. D.

At age of 20, Mr. Jabłoński began performing on stages in Europe, North and South America, Mexico, Israel, South Korea, and Japan. He has performed in many prestigious concert halls, including appearances on the Master Concert Series at Berliner Philharmonie. Mr. Jabłoński has also performed with prominent chamber music ensembles. He also founded “Chopin Duo” (Tomasz Strahl – Cello, Krzysztof Jabłoński – Piano) in 1999. Since 2004 he is a Member of “The Warsaw Piano Quintet” (Kwintet Warszawski) which was first founded by Władysław Szpilman in 1962.

In September, 2005 – Jabłoński performed at the National Philharmonic Hall in Warsaw with Orchestra of the 18th Century (Baroque Orchestra) conducted by Frans Brüggen on historical piano (Erard, built in 1849), during special series of concerts presenting Chopin’s pieces performed in an original sound with the use of the instruments of that time for the first time in Poland. Concerts with the Berner Symphonie-Orchester, the Jenaer Philharmonie, the Radio-Sinfonieorchester Stuttgart des SWR, and performance of the Shostakovich’s Piano Concerto No. 1 with the Festival Orchestra of the Grand Teton Music Festival and Scriabin’s “Promethee” with the National Philharmonic Orchestra in Warsaw, Poland under the baton of Andrey Boreyko are among most important events in Jabłoński’s calendar of 2006/2007 concert season. In 2008/2009 Jabłoński concentrated on new repertoire additions such as Rachmaninoff’s 3rd Piano Concerto which he successfully performed just recently in Poland, as well as Korngold’s Left Hand Piano Concerto performed with Stuttgarter Philharmoniker under the baton of Daniel Klajner.

Recent concert engagements were taking Jabłoński to Scandinavian Countries, where he has performed with Lahti Symphony Orchestra as well as series of concerts presenting original and improvised Chopin’s works together with Andrzej Jagodziński Trio. Jabłoński has also performed with one of Finland’s most celebrated instrumentalists, cellist Arto Noras. Those concerts were part of the Ludvig van Beethoven Easter Festival.

One of the highlights of Mr. Jabłoński’s artistic activities which he personally consideres very special was a performance of the Chopin’s Piano Concerto No. 1 with Polish Orchestra Sinfonia Iuventus under the baton of Maestro Jerzy Semkow.

Mr. Jabłoński has made many live recordings for radio and television in many countries. He has recorded many compact discs in Germany, Japan, and Poland. Jabłoński recorded three CDs (Etudes, Preludes and Impromptus and Works for Piano and Orchestra) in conjunction with The National Edition of F. Chopin’s Works project, directed by Prof. J. Ekier.