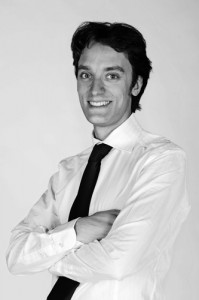 Alessandro Taverna was born in Caorle near Venice in 1983. He began his piano studies at the Music Academy of Santa Cecilia in Portogruaro with Laura Candiago Ferrari, graduating cum laude at the Conservatorio C. Pollini in Padua in 2001 He continued with Piero Rattalino at the Portogruaro Music School for Advanced Studies where he obtained his Final Diploma. He worked with Franco Scala and Leonid Margarius, and as well as attending classes of Louis Lortie and Boris Petrushansky at the International Piano Academy in Imola, where he received his Master Diploma in November 2008. In January 2009, Alessandro enrolled at the ‘Santa Cecilia’ National Music Academy in Rome??to study with Sergio Perticaroli.

In April 2009, he was awarded 2nd Prize in the London International Piano Competition having played Chopin Concerto No.1 with the London Philharmonic Orchestra at the Royal Festival Hall. The Independent wrote on him: “when Alessandro Taverna performed a magisterial accountof Chopin’s First Piano Concerto, the world was suffused with grave beauty: (…) flawless minutes of poetry”

It is recent his triumph at Minnesota International Piano-e-Competition, where he was awarded 1st Prize with unanimous plaudit of public and international Jury. Thanks to this victory, Alessandro will embark on a prestigious recital tour including a Fall 2010 debut recitalin New York City, sponsored by Yamaha Corporation of America and a CD release on the Ten Thousand Lakes label.

Two months later he was awarded 3rd prize and Bronze Medallist t the prestigious Leeds International Piano Competition 2009, which confirmed him as one of the most representive pianist of his generation.

He has played both as a soloist and with orchestra in concert halls throughout Europe and United States, participated in the 69th Maggio Musicale in Florence, played in London for the Italian Cultural Institute and for the Semaines Musicales in Crans-Montana (Switzerland). In February 2007 he performed at the prestigious Berlin Konzerthaus.

In 2008 the Government Commissariat for Expo Zaragoza and Fazioli Grand Pianos invited him to play in the Italian pavilion on the new Fazioli M. Liminal model, designed by NYT Line and the French architect Philippe Gendre. He participated in the Ottawa International Chamber Music Festivals in 2007 and 2008 and the summer season of Centre d’Arts d’Orford (Quebec), invited by Louis Lortie. In September 2008 he toured the major cities of South Africa (Pretoria, Johannesburg, Cape Town, Potchefstroom).

He recently was awarded with the prestigious “Mozart-Pizzini Praemium” by the Mozart-Pizzini Foundation in Ala. He was chosen as an artist of the prestigious Keyboard Trust: he performed at London and New York Steinway Hall, and opened the 2009-2010 season of The Châteauville Foundation in Castleton (Virginia). Last December 2009 he gave his debut in Chicago at Preston Braedley Hall for the Dame Myra Hess Memorial Concerts.

Alessandro has recorded for Radio Classica in Italy, for the Slovenian National RadioTelevision and for ClassicFm Radio in South Africa. He is a piano teacher at the “S. Cecilia” Music Foundations in Portogruaro. He is currently registered at the Mechanical Engineering Department of Padua University.