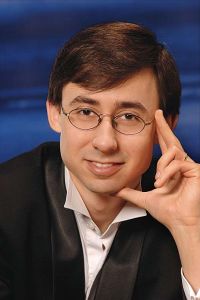 Since receiving the prestigious Nancy Lee and Perry R. Bass Gold Medal at the Twelfth Van Cliburn International Piano Competition in June 2005, Kobrin solidified his reputation as a rising star to remember, with an outstanding first tour of the United States, including recitals at Bass Hall for the Cliburn Series and for the Washington Performing Arts Society, followed by further debuts at La Roque d’Antheron, Ravinia Festival, Beethoven Easter Festival, Hannover Prize winners Series, Turner Sims and at the renowned Klavier-Festival Ruhr.

Alex Kobrin’s debut with the New York Philharmonic at both the Avery Fisher Hall and for the inaugural concert of the Bethel Woods Arts Centre was hugely successful. Alex Kobrin was also invited to open concert seasons for the Dallas Symphony Orchestra, BBC Proms and Royal Liverpool Philharmonic Orchestra.

Other appearances worldwide include a recital in Boston as well as his reinvitation to Ravinia Festival for their annual Labor Day celebration. Other performances include the Fort Worth Symphony, Florida West Coast Symphony, Fox Valley Symphony, Fairbanks Symphony, Flagstaff Symphony, Columbus Symphony, an annual tour to Japan and the International Chopin Piano Festival in Duszniki Zdroj (closing the festival). Kobrin will also be making appearances at the Festival Musique dans le Grésivaudan as well as teaching and performing at the International Keyboard Institute & Festival, Mannes.

Born in Moscow in 1980, Alex Kobrin began piano studies at the age of five with Professor Tatiana Zelikman at the Gnessin Special Music School, where he now serves as a member of faculty. A 2003 graduate of the Moscow Conservatoire, he studied under the late Professor L. Naumov and was the winner of the Busoni International Piano Competition in Bolzano, Italy in 1999, where he was awarded the special prize in memory of A. Benedetti Michelangeli. Shortly following, Kobrin was second-prize winner of the 2003 Hamamatsu Competition (with no first prize awarded) which led to tours extensively throughout Europe, Asia and South America.

In addition to the Van Cliburn Competition disc for Harmonia Mundi (2005) and three volumes of Essential Chopin for international labels, Alex will be releasing a Brahms CD (op.79, op.116 & op.119) on Quartz later in 2010.