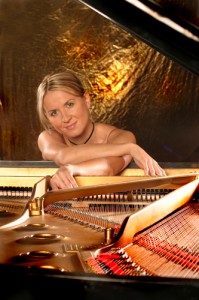 Beata Bilińska was born in Kraków. She belongs to the leading Polish pianists. In 1996 she graduated with distinction from the Karol Szymanowski Music Academy in Katowice in the class of Professor Andrzej Jasiński. Upon graduation, she joined the Academy’s faculty. She worked for six years as Professor Jasiński’s assistant becoming an associate professor.

She also developed her skills with Professor Klaus Hellwig in Berlin’s Hochschule der Kunste and at master classes given by such eminent pianists as Lee Kum Sing and John Perry. She also obtained artistic advice from Krystian Zimerman.

Foreign tours have taken her to Austria, Argentina, Bulgaria, Czech Republic, France, Germany, Ireland, Italy, Japan, Norway, Slovakia, Switzerland, Sweden, and the USA. She has performed at many prestigious festivals in Poland and abroad, including International Chopin Festival In Duszniki Zdrój, The Festival of Polish Piano Music in Słupsk (both three times), The International Chopin Forum In Wrocław, Internationale Preistrager – Junge Meister Interpreten in Landshut (Germany), the Festiwal du Vigan in Paris and 21st Festival “Chopin a Paris”. She has given recitals and appeared as a soloist in symphonic concerts in most of Poland’s philharmonic hall. She has held numerous grants, including those from the Frederic Chopin Society in Warsaw and the Ministry of Culture and Art.

She received an award from the Marshall of the Silesian Province for outstanding artistic achievements and was twice nominated for the “Passport” Award of the “Polityka” weekly.

In 2003 she made her debut in the New York Carnegie Hall, giving a recital in the main hall of Isaac Stern Auditorium. Harris Goldsmith from “The New York Concert Review” commented it: “…Mrs. Bilińska’s emotionally open and warm – hearthed approach came near to producing what I would hale thought impossible , the fear of making this sprawling sonata (No. 2 in B – flat Minor by Rachmaninow) actually enjoyable!…Fine recital