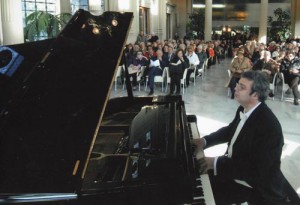 Giuseppe Tavanti was born in Arezzo. He was initiated in musical studies by the italo-american pianist Renato Premezzi , who was one of the most prestigious students of Arturo Benedetti Michelangeli. Mr Tavanti graduated as a young student at the “Morlacchi” conservatory in Perugia, where he studied under the guidance of Orazio Frugoni. Afterwards he improved hisself at the “Accademia Chianigiana di Siena”, where he was taught by Guido Agosti.

Giuseppe Tavanti was awarded the 2nd prize of the “Coppa Pianisti d’Italia” in Osimo and other several prizes in national and international well-known musical reviews, as the special prize he was awarded in the international “F. Liszt” competition. He has played as a soloist in Italy and abroad, and he was much approved by the critics and the public in many different international seasons as Stresa, Roma, Bari, Torino, Milano, Perugia, Firenze, Spoleto, Arezzo and Bologna. He played in public the unabridged editions of the two volumes of the “Clavicembalo Ben Temprato” and the “Variazioni Goldberg” by Bach. He also played and conducted in a Mozart cycle of concerts. Since 1989 mr Tavanti is the music school “Ruggero Leoncavallo” in Montecatini Terme director and the “I Concerti della Domenica e Pomeriggi Musicali” musical season artistic director.

Once every year he use to host a master class in piano interpretation, which is of great interest for many young talented coming from everywhere. He often takes part in juries of national and international piano competitions. In 2001 he was a protagonist in the Giuseppe Verdi celebrations as he played a recital composed of the fantasie of Litszt and Thalberg based on the works of Giuseppe Verdi. Giuseppe Tavanti played as solo pianist in the New Year’s Day concert of the “I Solisti di Fiesole” orchestra. He played two recitals in the “ridotto” of the Teatro della Scala in Milano and the critics and public were enthusiastic.