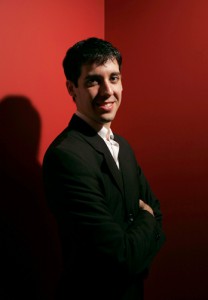 Israeli pianist Nimrod David Pfeffer has been praised for his interpretations of Romantic repertoire, particularly of the music of Chopin, and, in his early twenties, is quickly gaining recognition as one of Israel’s distinguished young classical pianists. He made his New York debut at Weill Recital Hall at Carnegie Hall in May 2008, in a recital celebrating Israel’s 60th Independence Day, and in September 2009 he returned in a Concert in Honor of Peace. He has appeared as soloist at the Russian Kremlin in a recital which was broadcast throughout Russia by “Kultura” television. Pfeffer has performed at Warsaw’s Royal Lazienky Park, New York’s Steinway Hall, Franz Liszt Academy in Budapest, Austria’s Graz Congress Hall, Chopin’s house in Zelazowa Wola, Hong Kong Academy for Performing Arts, and the Mozart Festival in Malta. He has performed for King Abdullah II and Queen Rania of Jordan and other world leaders as pianist and conductor in the World Economic Forum in Jordan in 2007. He made his debut at Alice Tully Hall, Lincoln Center in New York City in June 2010, in a performance of Beethoven’s Triple Concerto with the ISO and guest soloists from the Vienna Philharmonic Orchestra.

Devoted to promoting contemporary music, Pfeffer has given the world premieres of many works which were written especially for him. He made his debut with the Israeli Philharmonic Orchesta in December 2008, playing the World Premiere of Aharon Harlap’s Second Piano Concerto. Pfeffer has also appeared as soloist with the Israeli Symphonic Orchestra Rishon-Leziyon, the Israeli Sinfonietta Orchestra Be’er-Sheva, the European Youth Chamber Orchestra of Styria, the Ra’anana Symphonette Orchestra and the Buchmann-Mehta Symphony Orchestra. He has collaborated with such conductors as Mendi Rodan, Evgeny Zirlin, Vag Papian, Rene Staar, and Omer Wellber and has been featured in radio and television broadcasts in Israel, Austria, Russia, Hong kong, and the US. In August 2008 he was featured on the Young Artist Showcase of The New York Times classical radio station WQXR.

Active as a composer, Pfeffer’s works have been performed and broadcast throughout Israel. He is an enthusiastic chamber musician, and won the Buchmann-Mehta School of Music Chamber Music Competition in 2005.

Pfeffer has studied with Vadim Monastyrski, Pnina Salzman and Victor Rosenbaum and is currently enrolled in the Professional Studies program at the Mannes College of Music in New York City as a student of Richard Goode.