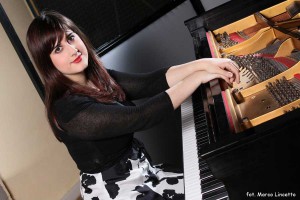 Winner of “Janina Nawrocka Award” for her “remarkable musicality and beauty of sound” in the International F. Chopin Piano Competition in Warsaw (2010), since the age of 6 Leonora Armellini won many national and international competitions. At the age of 13, she won the first prize in “Premio Venezia” (in Venice, Italy) with a great success of public and critics, which was the start of her important concert career, and “C. Togni International Piano Competition” in Brescia in the section piano and orchestra (2009).

She recorded Chopin Piano Concerto n. 2 and Andante spianato and Grande Polonaise Brillante for piano and orchestra (2007) and Mozart Piano Concerto KV595 (2008) for the label “Velut Luna”. A lot of her concerts and interviews were broadcast by Italian and international TVs and radios, and her concert in Quirinale Palace in Rome (January 2009) were broadcast live for RAI Radio 3.

Leonora’s upcoming public appearances incude: a concert in the “Martha Argerich Project” in Lugano, as soloist and with the violinist Lucia Hall (June 2011), a recital in Rome organized by the Polish Embassy to celebrate the Polish Presidency in the Council of the European Union (July 2011), a concert for the “Festival Dino Ciani” in Cortina d’Ampezzo, Italy, with Liszt Piano Concerto n. 1 (July 2011), a recital in the Great Hall of the Conservatory of Geneva for the Chopin Society (October 2011), a concert in the Concert Hall of Warsaw Philharmonic with Chopin Piano Concerto n.1 (May 2012).