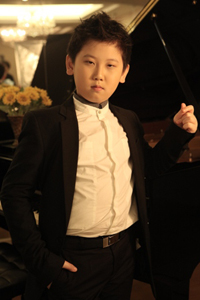 Daniel Wu is one of the most talented young pianists in China, whose extraordinary devotion to music and passion for improvement resulted in flawless and mature performances.

Daniel Wu was born in QingHuangDao Hebei Province on Nov. 2nd,1999 and has been learning piano since he was three and half years old. His first steps into the piano world were guided by Jin Zhang, the head of piano department at Central Conservatory of Music. In 2010, he got into the Primary school division of Central Conservatory of Music, where he studied under Professor Xinning Zhang. During studies Daniel won the third prize at the third Cadenza Piano Competition in 2009 and the third prize at the thirteenth XingHai Piano Competition in 2011. In the same year Daniel Wu joined FaceArt Music InterNations in Shanghai founded by Piotr Tomasz and Jenny Q Chai and quit the Central Conservatory, focusing only on playing piano under the tutelage of Piotr Tomasz, Jenny Q Chai and Marko Pavlovic. Since then, Daniel has won the first prize of FaceArt Audience prize and two first prizes at the Hong Kong International F. Liszt Piano Competition of the China Region in two categories – under 13 years old and under 26 years old.