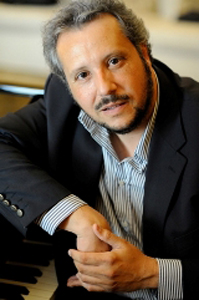 Maurizio Moretti is one of the best interpreters of the renowned Italian school of pianoforte. His ability to interiorize and develop the musical motives in a continuous search for the aesthetic perfection has made him the star of the most famous international concert halls. The pianoforte is his reason of life, and on stage he transforms himself from a timid, reserved man to an imposing pianist, with his magic fingers flying over the piano keyboard to deliver breathtaking performances. His ability to mix together incredible silences and powerful fortissimo, and the combination of perfect technique and amazing interpretation with irresistible Italian charm make him a star that enthuses the public and the most demanding critics.

During his career spanning more than two decades, Maurizio Moretti has performed regularly in the most famous European concert halls, including those of Berlin, Vienna, Moscow, Amsterdam, Prague, Milan, Budapest, Frankfurt, Madrid, Stockholm, Grenoble and Lille. He performs frequently around the world with concerts in Japan, North and South America, Persian Gulf and Australia.

His live recording of Beethoven?s First Piano Concerto with the Philharmonie der Nationen conducted by Justus Frantz, recorded at the famous Hamburg MusikHalle in 2003, has been the perfect conclusion of an outstanding tournée comprising 14 concerts in Spain and Germany and has received rave reviews. He has recently signed a contract with the prestigious Japanese record company Camerata Tokyo?Sony for to record, starting in the 2005-2006 season, two CDs dedicated to Mozart?s piano concertos, two CDs for piano duo as well as CDs with music by Wagner and Listz.

Born in Cagliari, he studied under Ida Allegretto at the Conservatory of his town and then for five years with Aldo Ciccolini, who wrote about him: “an extraordinary rhythmical vitality, a special inborn musical treatment of sound and a great technical capacity which characterize his pianism. He is surely one of the most talented and original exponents of Italian pianism?.

He is also an outstanding teacher: he is currently full professor of pianoforte at the Conservatorio di Musica in Cagliari, where he also teaches piano Master classes. Furthermore, he is an invited guest professor at the renowned Kusatsu Festival and Academy in Japan and has taught Master classes all around the world.