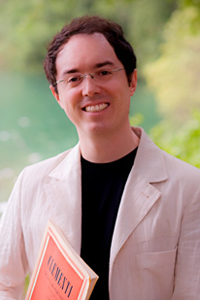 Alessandro Marangoni, winner of several national and international awards, has appeared in many important musical events in Europe and America, both as a soloist and as a chamber musician. His most recent performances were in Rome (Accademia di Santa Cecilia), Milan (Teatro alla Scala), Venice (Teatro La Fenice), Florence (Accademia della Crusca), Lucca (Associazione Musicale Lucchese), Ischia (the Walton Foundation), Cittadella in Assisi, Teatro Verdi in Trieste, as well as at the Engadiner Internationale Kammermusik-Festspiele, Rossini Opera Festival in Pesaro, Sagra Musicale Umbra, the Italian Cultural Institute in London, the ‘Teatro Dal Verme’, Milan and in Canada (Toronto), Germany, Switzerland, Spain, Great Britain, Chile, Colombia, Croatia etc. As a chamber musician he collaborated with some of the most important Italian musical personalities and groups, including Mario Ancillotti, Vittorio Ceccanti, Aldo Ceccato, Valentina Cortese, Filippo Crivelli, Quirino Principe, Milena Vukotic, Carlo Zardo and the Nuovo Quartetto Italiano. He recently played with great success of public and critics in Spain with the Malaga Philharmonic Orchestra, Granada Philharmonic and in Bratislava with Slovak Philharmonic Orchestra, conducted by the great Italian conductor Aldo Ceccato. He played with other several orchestras like the European Philharmonic and Mozarteum Kammerorchester. On December 2007 Alessandro Marangoni played at Teatro alla Scala in Milan, with a tribute to the great Italian conductor Victor de Sabata, with Daniel Barenboim. Alessandro Marangoni was born in Italy in 1979. He studied piano with Marco Vincenzi, obtaining the diploma with honours (summa cum laude) and he continued his studies at the ‘Scuola di Musica di Fiesole’ with Maria Tipo. Besides his musical studies he also obtained a graduated with honours in philosophy at the ‘Universit? di Pavia’ with a thesis about Fernando Liuzzi’s philosophy of music. He was also a merit student of the Almo Collegio Borromeo, one of the most ancient and important European colleges.

He has recently started an artistic cooperation with the Italian actress Valentina Cortese. He plays the piano for the Trio Albatros Ensemble, with whom he has won a relevant acclaim and an enthusiastic appraisal all over the world. Composers such as B. Bettinelli, L. Chailly, G. Gaslini, F. E. Scogna, I. Fedele, A. Solbiati have written works for the Ensemble. Alessandro has recorded a CD (La Bottega Discantica) with the piano works written by Victor de Sabata, for the 40th anniversary of his death, a cd with Nino Rota?s chamber music and a cd dedicated to Bohuslav Martinu for Stradivarius. He is recording the complete piano works by Rossini (Pech?s de vieillesse, 16 cds), Clementi?s Gradus ad Parnassum (4 cds) and Castelnuovo- Tedesco Piano Concertos with Malmö Symphony Orchestra (cond. Andrew Mogrelia), all for Naxos. In 2007 he won the prestigious ?Amici di Milano? International Prize for the Music. He teaches piano in italian Conservatories and in several masterclasses in Europe and South America. He is the piano teacher at “Le Altre Note” (Bormio, Italy), an international summer campus. With Pierpaolo Venier he projected the Chromoconcert?.