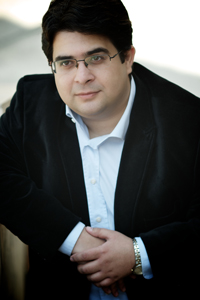 Gábor Farkas (1981) began his music studies at the age of five and holds a DLA and an MA degree in piano performance and teaching from Ferenc Liszt Academy of Music in Budapest (his teachers were until the Master degree: Sándor Falvai, Attila Némethy , in the doctoral studies: Zoltán Kocsis, Tamás Vásáry), after the Liszt Academy he studied by William Grant Naboré at the International Piano Academy Lake Como in Italy.

His uplifting performance has enchanted the audience throughout Europe and the world: along the past years he performed in the major concert halls of Hungary, Austria, Germany, Italy, France, Finland, England, Switzerland, Spain, Canada, Vietnam, South Korea, Japan, China etc. He was invited to prestigious international festivals, such as the Budapest Spring Festival, International Piano Forum, Berlin, Pélerinages Festival, Weimar, Schumann Festival, Zwickau, Musicathlon Festival, Beijing, Summer Festival in Dorset, (England) and the Ferenc Liszt Festival in the Castle of Gödöllő, Hungary.

In January 2011, he was the soloist of the Official Opening Concert of the Liszt Year 2011, Zoltán Kocsis conducting the National Philharmonic Orchestra at the Palace of Arts and he was also the soloist of the Closing Concert of the Chopin Year, 2010 with the Sinfonia Varsovia in Budapest. So far, he has worked with such world-wide known conductors as Ádám Fischer, Tamás Vásáry, Olli Mustonen, Philippe Bender and George Tchitchinadze.