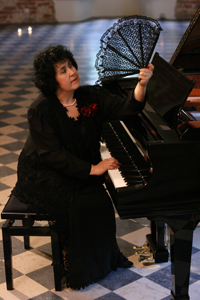 She has been the laureate of many prizes: the 1st Prize and Special Prize for the best performance of Karol Szymanowski?s works at the Karol Szymanowski Competition in Łódź (1983), the Estrada Młodych (Stage for the Young) Prize at the 18th Festival of Polish Piano Art in Słupsk (1984), the prizes and scholarships funded by Chopin Society in Warsaw (1983 and 1984). Mariola Cieniawa received a Special Prize from the Jury of the 3rd International Piano Contest in Palm Beach, Florida (USA) in 1989. In 1990 she won the 2nd Prize at the 5th International Chopin Competition in Palma, Majorca. She also received the 3rd Prize at the Chopin Competition in Cologne, Germany (1991).

She has been very active as a chamber musician, collaborating with best Polish performers. In her artistic career she has given concerts in Austria, Germany, Belgium, Spain, Norway, Finland, Sweden, former Soviet Union, North Korea, USA, Czech Republic, Japan, Hungary, and Italy.

As a soloist and a chamber musician she has done archive recordings for Polish Radio and Television, and ?Polskie Nagrania? recording company. Her discography includes several items: Danza Iberica- solo recordings of music written by Spanish composers (Castello recording company), Piano Trios by Mendelssohn and Shostakovich ? a CD recorded with Kaja Danczowska-violin and Dorota Imiełowska-cello (published by CD Accord), 2 CDs with contemporary music recorded with the cellist Dorota Imiełowska (Koch Classics). She has also recorded several works of Krzysztof Penderecki: Violin Sonatas No. 1 and No. 2, Miniatures for violin and piano, together with the violinist Robert Kabara, and Sextet.

In 1994 Mariola Cieniawa initiated piano master classes led by Kevin Kenner in Krynica (1994-2001), where she was both the artistic director and teacher.

She has been a juror at several piano competitions in Poland, and at the 2nd Egyptian Chopin Competition in Cairo.

She has been the Artistic Director of Summer Music Festival in Krynica since 2002.

Mariola Cieniawa teaches her own piano class at the Academy of Music in Cracow.