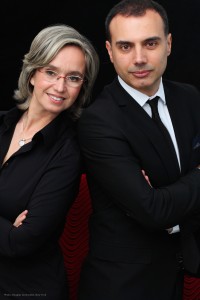 Steinway Artists Carles Lama and Sofia Cabruja are a paragon of artistic talent in the world of classical music and one of Europe?s most renowned piano duos.

Acclaimed by both the public and critics alike as two musicians with an extraordinary capacity to move an audience to tears, the duo also exhibits a spectacular synchronisation and a very rare mutual understanding.  Carles and Sofia have gained critical acclaim for their brilliant technique, passion, unparalleled quality of sound and infinite elegance.

With a profound knowledge of all classical music genres, Carles & Sofia have developed a unique style in the interpretation of the repertoire for four hands. The duo possesses a diverse range of orchestral colours, a very natural phrasing and an impressive singing tone, together with a deep sense of harmonic consciousness.

Both were born in Girona (Catalonia, Spain) and showed exceptional musical talent early on. After graduating college in Barcelona Conservatory, they continued their musical training, first in the Ecole Normale in Paris, then at Hartt School of Music (University of Hartford, USA). The two professors who had the greatest influence on the duo are the Russian pianist Nina Svetlanova and the Brazilian pianist Luiz de Moura Castro.

Their repertoire ranges from Bach to 21st century and includes all major works for piano four hands together with the most brilliant and demanding orchestral transcriptions. They also have developed a very close relationship with many contemporary composers, like John Carmichael or Daniel Basomba, who, after listening to the duo, created works especially for them.

Carles and Sofia are acclaimed recording artists of the KNS-classical label with a discography including Schubert?s Fantasy in F Minor, Brahms?Waltzes Op. 39, Rachmaninov?s Suite Op. 11 or the complete works for four hands by Australian composer John Carmichael.

Carles and Sofia are also involved in a variety of different efforts geared towards promoting and spreading classical music and classical artists, having founded and developed different series of concerts and festivals, along with TV projects.

As a part of their passion for education, they have been invited to lecture and teach Master Classes in many different European and Asian countries, including Italy, Greece, Germany, France, China, Japan and Singapore.

Carles and Sofia have always been committed to helping with social needs. In 2001, her Royal Highness Margarita de Borbón presented to them an honorary distinction from UNICEF, in recognition of their humanitarian efforts.

In 2012, they founded their own solidarity project: Concerts4Good, Music on a Mission.