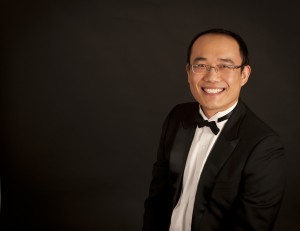 Jian Liu has been gaining reputation as a well sought-after solo pianist, chamber musician, and educator across the globe. He has performed as a soloist and chamber musician throughout Europe, Asia, and North America. His artistry has been taking him to some of the most prestigious concert halls, including Carnegie Hall, Steinway Hall in New York, Rose Hall of Lincoln Center, Sprague Hall and Woolsey Hall of Yale University, and Paul Hall of Julliard School, and as a featured soloist with orchestras including Symphony Orchestra of National Philharmonic Society of Ukraine, Phoenix Symphony Orchestra, Christchurch Symphony Orchestra, and Yale Philharmonia, among others.

As a dedicated and enthusiastic chamber musician, Jian is the founding pianist of Te K?k? Trio, the resident trio at New Zealand School of Music, and the trio has appeared on various chamber series in Singapore, Australia and New Zealand. Jian has also performed as a guest pianist with some of the world-class musicians, including cellist Jian Wang, clarinetist David Shifrin, flutist Ransom Wilson, Boston Symphony Orchestra cellist Alexandre Lecarme, violinist Sarita Kwok, and pianist Boris Berman and Maria Jo?o Pires.

As a passionate performer, Jian is equally committed to education. Jian served for four years on the faculty of the Yale Department of Music, and he is currently the Head of Piano Studies at New Zealand School of music, as well as the honorary piano professor at Qingdao University in China. He has also taught master classes and lectures at the Central Conservatory of Music (China), Wellesley College and East Carolina University (USA), Yong Siew Toh Conservatory of Music (Singapore), and Sydney Conservatorium, among others. Jian studied with Professor Jin Zhang from Central Conservatory in Beijing for six years, then with Dr. Caio Pagano at Arizona State University for eight years. He holds Master of Music, Doctor and Master of Musical Arts degrees from Yale School of Music, where he was a student of Claude Frank.