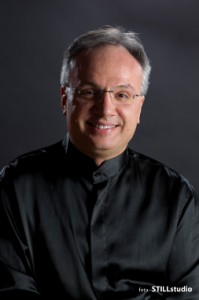 I remember Pasquale Iannone, very young, sat at the piano in my class at the Academy in Biella where he came to pass an audition.

I was immediately struck by the power of his sound he obtained without any visible effort, by the coherence of his musical speech, direct, free from mannerism of doubtful taste.

Here is a person who will make a career for himself.

I don’t think I was wrong. Today, P. Iannone is reckoned among the pianists who ” are able” not only to play and interpret, but also to face the hardest pages of the virtuoso repertory, that repertory disappeared for 15 years from the piano programmes ” A. Ciccolini

With these words Aldo Ciccolini has given Pasquale Iannone his encouragement and Iannone has payed his trust back with devotion, exactness and enthusiasm that have always characterized his way of playing the piano, being very successful in prestigious international competitions such as the ?Casella? in Naples, the ?Gina Bachauer? in Salt Lake City, the ?New Orleans? (USA), the Web Concert Hall Int. Competition (USA).

At present, in the course of a career during which he has played both in recitals and as solo player with the orchestra in Italy, USA, Japan, Germany, Romania, Spain, Belgium, Turkey, South Africa, France, South Korea, England, Scotland, Venezuela, Mexico, in concert temples such as the Carnegie Hall in New York, the Sala ?Verdi? in Milan, the Kumho Recital Hall in Seoul, Pasquale Iannone has made a name as a pianist and teacher of international fame.

As a teacher he has managed to allow his students to stand out in the greatest international competitions.

thanks to his recordings and performances such as the Concert op.59 by Moszkowski and the Concert n.4 by Scharwenka, besides his usual repertory, he has been reckoned among the best italian pianists who have been appreciated abroad as well.

In the last years Pasquale Iannone has played both in recitals and with orchestra in Italy, Romania, Japan, France, the USA, Germany and has made his debut successfully in Turkey ( Istanbul ) with the Wiener Kammersymphonie and in Mexico with Orquesta Sinfonica del Estate del México.

Moreover, in June 2014 he has been invites to serve as a juror of the ?Gina Bachauer International Artists Piano Competition? ( Salt Lake City – utah – USA ).

Between the end of 2014 and the first part of 2015 he went on tour to China, he has played the Concerto Soirée by Rota in Budapest with the MAV Symphony Orchestra, he has made his debut in Bulgaria with the 5th Concerto by Beethoven, he has played in Ankara with the Baskent Chamber Orchestra, he has come back to Milan for a recital in Sala ?Verdi? and has made his debut at the Gasteig in Münich ( Carl Orff Saal ) with the Concerto k 414 by Mozart.