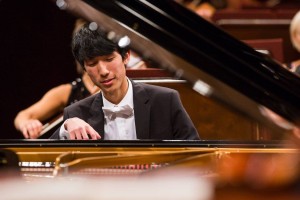 18-year old pianist Eric Lu is rapidly building an international reputation as a young pianist with enormous promise, and a distinctive musical voice.

He started piano studies at the age of 6 with Mrs. Dorothy Shi. While at the New England Conservatory Preparatory School, he studied piano with Alexander Korsantia, and Mr. A. Ramon Rivera. In 2013, Eric entered the Curtis Institute of Music in Philadelphia, where he currently studies with Profs. Robert McDonald and Jonathan Biss. He is also a pupil of pianist Dang Thai Son.