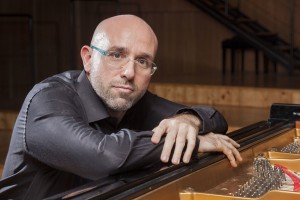 The international critics wrote about him: ?A stellar hour of piano music… Those who did not witness it missed an opportunity. We only hope to listen to him again? (Tölzer Kurier); ?Marchegiani?s triumph in Berlin? (La Stampa); ?By his own nature Sergio Marchegiani is a thinking mind on piano… he let perceives a melancholy he exalted with extraordinary ability and extreme caution? (Berliner Morgenpost); ?Marchegiani carries the audience into his introspective and poetic world? (L’Est Républicain).

Since many years Mr. Marchegiani performs an intense concert activity all over Europe, North and South America, Asia and Australia. He played in the most prestigious theatres and concert halls such as: both Stern Auditorium and Weill Recital Hall at the Carnegie Hall in New York, Philharmonie and Konzerthaus in Berlin, Golden Hall at Musikverein and Konzerthaus in Vienna, Laeiszhalle in Hamburg, Rudolfinum and Smetana Hall in Prague, Gasteig in Munich, Suntory Hall in Tokyo, Sala Sao Paulo in Brasil as well as in Rome, Milan, Barcelona, Paris, Oslo, Stockholm, Moscow, St. Petersburg, Los Angeles, Philadelphia, Mexico City, Montevideo, Baku, Astana, Seoul, Nanjing, Hong Kong, Bangkok, Singapore, Adelaide, etc.

His repertoire ranges from Bach to contemporary music but recently he worked especially on Chopin music, his dearest author. Nowadays Mr. Marchegiani is an acclaimed performer of Chopin by audience and critic all over the world: ?Marchegiani seems perfectly commune with Chopin he plays with rare mastery? (La Provence); ?Sergio Marchegiani and the spellbinding Nocturnes… Chopin Nocturnes were masterfully performed… his hands floats on the keyboard opening an out of time, oversized space? (La Marseillase). In 2010 he was invited to play at Nohant Festival for Chopin?s 200° birth anniversary together with acclaimed soloists such as Kissin, Ciccolini and Berezovsky. Following that successful debut, he returned to play in Nohant in 2013.

The same year Amadeus label published a double CD with Chopin?s Complete Nocturnes which got amazing reviews from the critics.

Also a keen chamber musician, he performed with renowned musicians such as Bruno Canino, Simonide Braconi, Moscow Soloists String Quartet and Oistrakh String Quartet. Since ten years he also works with pianist Marco Schiavo playing hundreds of concert all over the world. Schiavo-Marchegiani is one of the most dynamic and appreciated Italian piano duet; in 2014 Decca published their first CD dedicated to Franz Schubert. A new CD with Brahms?s complete Hungarian Dances will be released soon.

He teaches piano at Conservatory in Trapani; he is in frequent demand for masterclasses, lectures and piano competition juries in Italy and all over the world.