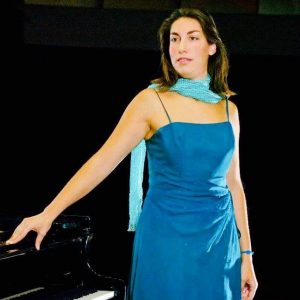 At the age of seven she has participated in national and international competitions, winning over twenty prizes and awards. She began her concert career at eight years, performing as a soloist and with chamber groups, received very good reviews from audiences and critics, and being appreciated especially for her temperament, excellent piano technique and remarkable expressive and musical depth. She has had over 120 concerts in Italy and Europe: in Milan in prestigious halls such as the Bocconi University, the Philological Club, the Press Club, the rooms Puccini and Verdi Conservatory, Teatro dal Verme, Palazzo Cusani, in the season of the “Concert of the Triennale”, the Ente Fiera di Rho for Kawai pianos, Streheler Theater, the “Friends of the gallery” La Scala; in major Italian cities (Varese, Trento, Genoa, Monza, Riva del Garda …) for important concert associations (Agimus, musical evenings …) and in prestigious locations (Auditorium San Barnaba of Brescia, Palazzo Farnese in Piacenza, Teatro Comunale Portogruaro, German Institute of Trieste, Paisiello Theatre of Lecce, Teatro Municipale in Piacenza, Auditorium “Verdi” in Parma, Auditorium RAI Palermo, Teatro Marcello in Rome etc.); in European cities such as Paris (at the renowned Hotel Ritz, in the context of the anniversary of the birth of Chopin and the Salle Cortot), at the Prague Castle (young Festival 1993-94), Geneva and others.

Following her artistic activity have appeared numerous articles in national newspapers dedicated to his reviews and interviews. She was host of the show “The Pianist”, dedicated to the best emerging Italian talents, performing live on Radio Classical music by Scarlatti and Prokofiev. Some of her concerts were broadcast on Radio 3 and Vatican Radio, TV 2000, TV Lombardia, Lodi Crema TV, Rai Sicily. In 2015 she recorded a CD for the record label MAP Edition: Friedrich Kalkbrenner – Complete Piano Music vol.1, getting a great review in the prestigious magazine Classic Voice. Her repertoire the most significant piano works from the Baroque to Contemporary, with particular attention to authors like Schumann, Liszt, Beethoven and Prokofiev, the wheel of the op.10 Studies of Chopin, the Transcendental Etudes of Liszt Paganini (first version of 1838 ), performed at the Verdi hall of the Milan Conservatory, and little-known works by authors such as Kalkbrenner; she faces also happy to contemporary music, performing works by Francesco Marino, Igor Cognolato, Aloise Vecchiato, Walter Ferrato.

She has a wide selection of works in the repertoire for piano duo (4 hands and 2 pianos). She has performed with the Jupiter Orchestra, I Virtuosi Academics, Bacau Philharmonic Orchestra, Italian Philharmonic Orchestra, Toscanini Philharmonic Orchestra with conductors such as Sergio Vecerina, Ovidiu Balan, Roberto Misto, Andriy Yurkevich and others.  Besides her concert activity, from the age of 18 she devotes with passion and commitment to teaching. Significant number of prizes won by his students in the competitions “Vidusso” Milan, “Giussano City”, “Bach” in Sestri Levante, “Palma d’oro” Saint Bartholomew, “Scarlatti” of Carpenedolo. In 2011 she received a prestigious award from the American Protege String and Piano Competition for preparing a small student to perform at New York’s Carnegie Hall. She has already produced several shows for children, such as “Peter and the Wolf” by Prokofiev and “L’Histoire de Babar” by Poulenc for piano and narrator of the renowned musicattore Luigi Maio. She has developed a personal method of teaching for children of 4.5 and 6 years of great success and proved particularly effective. She regularly holds summer courses for children. In 2012 she was the Artistic Director of the International Music competitions Madesimo (International Chamber of vocal music competition “Premio Carducci”, with the Presidency of Maestro Guido Salvetti, Piano Competition “City of Madesimo Prize”, with the chairmanship of Roberto Plano). In 2015 and 2016, she held a seminar of piano methodology (fingering, storage, anxiety) management at Boario Masterclass in Darfo Boario Terme (BS).