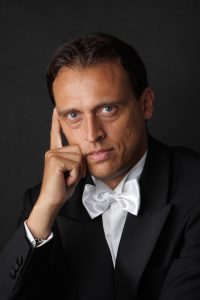 Lorenzo Di Bella is a remarkable talented pianist, a brilliant virtuous, an exciting and refined musician. I was his teacher for three years and always admired his great technical skills and also his strong artistic personality, above all, his desire to “speak” to the public” …these were the words of Lazar Berman some months before he died.

Prize winner of several international piano competitions he received in 2005 the First Prize and Gold Medal in the “V. Horowitz” International Piano Competition in Kiev.
In 2006 former Italian President C.A.Ciampi awarded him with the “Sinopoli Prize” in honour of the famous orchestra director Giuseppe Sinopoli, passed away in 2001.
He has won the most important national piano competitions, such as the “Premio Venezia”, after which he was invited to play at the most famous italian festivals.
Recently he has performed with great success at the Two World’s Festival in Spoleto, Teatro “La Fenice” in Venice, Teatro Olimpico in Vicenza, “Teatro delle Muse” in Ancona, at the Liszt Festival in Utrecht, ETH of Zurich, Hamburg, Berlin, Praha, Sarajevo, Montreal, Beijing, Shanghai, Denver (C.I.P.A.) at the “Società dei Concerti” in Milan, and in the Auditorium “Parco della Musica” in Rome where he played with the Santa Cecilia National Symphony Orchestra conducted by M° James Conlon.
Lorenzo Di Bella began his piano studies at the age of 5. A promising pupil, he graduated at the Conservatorio Rossini of Pesaro with Bruno Bizzarri with the highest vote and honours. The following five years he attended the courses ofFranco Scala and Lazar Berman at the “Piano Academy – Incontri col Maestro” of Imola, graduating in 2002, and completed his studies at the “National Academy of St. Cecilia” in Rome with Sergio Perticaroli, where he graduated on June 2004 with the highest vote.
His intense musical activities led him to collaborate with many orchestras: Florence Symphony Orchestra, Orchestra Filarmonica Marchigiana, Pro-Arte Marche Orchestra, Pescara Symphony Orchestra, Orchestra “Pomeriggi Musicali” of Milan , San Remo Symphony Orchestra, Philharmonie of Bacau, O’Porto National Orchestra, National Symphony Orchestra of Ucraine, Nancy Symphony Orchestra, SudWestDeutsche Philarmonie, Villingen-Schwenningen Symphony Orchestra, Philharmonisches Kammerorchester Berlin and New World Philarmonic.
Lorenzo Di Bella has a very active teaching schedule as main piano professor at the High Music School “Monteverdi” in Cremona and artistic director of the “Accademia Pianistica delle Marche” in Recanati (Italy).
In 2013 he has played the complete Rachmaninov’s Etudes-Tableaux in Milan and Turin for the prestigious MiTo Festival-September Music.