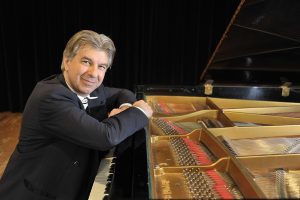 After having studied at the Darius Milhaud Conservatory of Aix-en-Provence together with Jacqueline Courtin and Bernard Flavigny, he was admitted to the National Superior Conservatory of Paris for Music and Dance where he took classes with Geneviève Joy, Jean Hubeau, Christian Ivaldi and Dominique Merlet. In France he has also worked with: Carlos Roqué Alsina, Alberto Neuman, Evgeny Malinin.
In 1984 he won the First Prize in the Acanthes International Competition presided over by Iannis Xenakis.
In 1986, a scholarship allows him to study in the Moscow Tchaikovsky Conservatory where he gets some good advice from Henriette Mirvis, Samvil Alumian, Mikhail Vosskressensky and Lev Naoumov.
The same year he won a prize in the First Franz Liszt Piano Competition in Utrecht.

He has organized master classes in numerous countries and has been featured on various radio and TV shows.