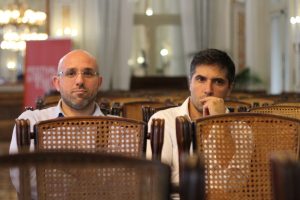 Schiavo-Marchegiani piano duet shows how exciting is to make music together”; “They offered a perfect musical night”; They are pianists with amazing sound culture… their performance of Schubert’s pieces was brilliant, noble and extraordinarily original”.

Mr Schiavo and Mr Marchegiani are highly appreciated by the audience and critics for their musical personality, great expressiveness and naturalness, beauty of sound, intensity and overwhelming energy of their performances.

At the same time as their solo concert international activity, since 2006 they have been playing together all over the world performing hundreds of concerts in the most prestigious venues and festivals including Carnegie Hall in New York, Goldener Saal at Musikverein and Konzerthaus in Vienna, Mozarteum in Salzburg, Philharmonie (Grosser Saal) and Konzerthaus in Berlin, Laeiszhalle in Hamburg, Beethoven-Haus in Bonn, Smetana and Dvořák Hall in Prague, Sala Verdi in Milan, Suntory Hall in Tokyo, Solis Theatre in Montevideo, Sao Paulo Hall in Brazil as well as in Rome, Paris, Zurich, London, Sofia, Istanbul, Moskow, St. Petersburg, Montreal, Toronto, Washington, Mexico City, Baku, Astana, Hong Kong, Bangkok, Singapore, etc. In 2013 they made their debut at prestigious Ravello Festival playing Mozart’s Concerto for two pianos and orchestra K. 365.

In 2014 Decca label published their first CD, completely dedicated to Franz Schubert which got amazing reviews from the critics and five stars from Amadeus magazine. “In the Fantasia the two pianists play with a lively and easy immediacy, whilst giving a strong sense of clarity to Schubert’s more poetic movements… it has some lovely poignant moments and is highly evocative… The remainder of the items on the disc are all admirably played” (Robert Hugill); “Marco Schiavo and Sergio Marchegiani do a nice job with this music… they’re forthright and clear-eyed, producing a nice range of tones and textures, and handling transitions with assurance…” (Stephen Francis Vasta).

Both of them studied with great musicians such as Ilonka Deckers Küszler, Alexander Lonquich, Bruno Canino, Franco Scala, Aldo Ciccolini and Sergei Dorenski.

They teach in Alessandria and Potenza Conservatories and are in frequent demand for masterclasses and piano competition jury all over the world (Spain, Serbia, Turkey, United States, Mexico, Kazakhstan, Japan, Australia, Brazil, etc.).