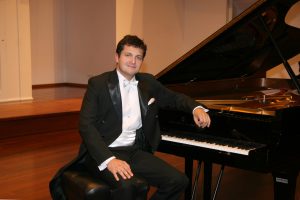 Piotr Szychowski, prizewinner of international piano competitions in Ettlingen, Darmstadt, Rome, Bucharest and Warsaw, on which he received awards for the best performances of F. Chopin’s works. In 2009, he made his debut at the Berlin Philharmonic with Das Sinfonie Orchester Berlin performing Piano Concerto in C minor KV491 by Mozart. In July 2010, he performed with José Carreras in front of a 10,000th audience the 777th anniversary of the city of Toruń. He performs in most European countries in Japan, India, Lebanon and China, appearing in prestigious halls, including the Royal Festival Hall in London, the National Philharmonic in Warsaw, the Philharmonics of Liverpool, Sofia, Kiev and Murmansk. He performs as a soloist in symphonic concerts conducted by eminent conductors performing both piano concertos by J. Brahms in D minor, Op. 15 and B flat major op. 83 and F. Chopin in E minor, Op. 11 and F minor, Op. 21, III Concerto in D minor, Op. 30 by S. Rachmaninov. He represented Poland at the 15th International Piano Competition Fryderyk Chopin in Warsaw. He graduated with honours from the Academy of Music I. J. Paderewski in Poznań (2005) and Universität der Künste in Berlin (2013). Currently, as a habilitated doctor of art, he leads the piano class at the Academy of Music. I. J. Paderewski in Poznań. He regularly conducts master classes in Europe, China (Beijing, Guangzhou, Shenzhen, Qingdao) and India (New Delhi).