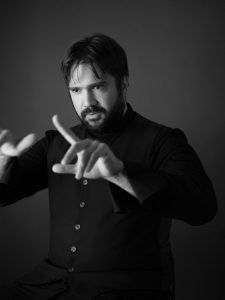 He has played for the most important Italian musical Institutions such as Società del Quartetto, Serate Musicali, Società dei Concerti, Brescia and Bergamo Piano Festival etc. and abroad, invited both in Europe and in more than 35 American states, in China and Japan in places such as Carnegie Hall in New York, Rachmaninoff Hall in Moscow, Gasteig in Munich, Mozarteum in Salzburg, Louvre and Salle Gaveau in Paris, Forbidden City Hall and NCPA in Beijing, Roque d’Antheron and Tiroler Festspiele.

Passionate about chamber music, he played in numerous chamber ensembles, from duo to decimino (in 2018 he founded the BAggio Sinfonietta) and his large repertoire shows his particular interest in contemporary music – many are the compositions dedicated to him and performed in world premiere.

A long collaboration with the Teatro alla Scala has led him to play for étoiles such as Roberto Bolle, Svetlana Zacharova, Massimo Murru and Sylvie Guillem.

Along with concert activity, Cabassi has undertaken an intense recording activity. He has released his first recordings for labels such as Sony BMG (his first album Dancing with the orchestra won the Classic Voice magazine’s 2007 Critics Award for best debut of the year), Concerto Classics and Col-legno.

In 2012 he has debuted for Decca, with an extraordinarily successful album (Mozart Sonatas and Variations) and he began recording Beethoven’s Piano Sonatas.

He began studying piano at a very young age, graduating with honors in the class of Prof. Edda Ponti at the Giuseppe Verdi Conservatory in Milan and he was the first Italian admitted to the International Piano Foundation in Cadenabbia, on Lake Como, with William Grant Naborè, KU Schnabel, L. Fleisher, D. Bashkirov, R. Tureck, A. Weissemberg, and many others.

He is the artistic director of the Kawai concert seasons in Ledro (TN), Un piano in Ateneo (Kawai – Cattolica, Milan), Incontri Contemporanei (Milan), Kawai summer music camps in Ledro and of the Shigeru Kawai International Competition.

In 2010 he founded with his wife, the Russian pianist Tatiana Larionova, the Primavera di Baggio concert season: the aim is to enhance and relaunch the disadvantaged suburbs of his city, involving children and “invading” the association spaces, especially those redeemed by the mafia.