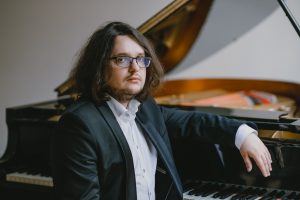 He has played concerts in Poland and abroad, including in the United States, Japan, Vietnam, Germany, Italy, Greece, Norway, Canada, France and Iceland. In November 2018 the pianist performed with great success at the Lincoln Center in New York.

In February 2022 his first solo album “Brahms, Chopin” was released, including recordings from his recital in the Concert Studio of the Polish Radio.

His piano repertoire is very extensive and diverse, although he specializes in interpreting classical works.

In a review of the Chopin Competition, Jed Distler in The Gramophone wrote: I’ve tended to focus on pianists whose particular character traits, talents and quirks (or lack thereof) readily manifest themselves. Consequently, several ‘dark horses’ have nearly escaped my attention, such as Jakub Kuszlik. I rewatched Kuszlik’s second-stage performance and quickly realised just how seriously I had underestimated him. [….] Indeed, Kuszlik is so musical that you only notice his remarkable virtuosity after the fact. He was born to play Chopin.