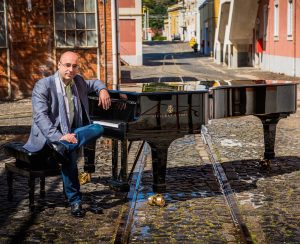 One of Portugal’s foremost musicians, both nationally and internationally, Filipe Pinto-Ribeiro is considered a ‘poet of the piano’, whose musical interpretations, characterized by profound emotion and intellectuality, are highly appreciated by the public and by music critics.

Born in Porto, he studied in various countries before becoming a disciple of Lyudmila Roshchina at the Tchaikovsky Conservatory in Moscow, where he obtained a Doctorate in Musical Performance in 2000, with maximum classifications, holding the Calouste Gulbenkian Foundation Scholarship.

Playing the whole spectrum of the piano repertoire, from the baroque to contemporary music, he has premiered many works from composers such as D. Shostakovich, M. Nisinman, E. Carrapatoso and S. Gubaidulina.

As a soloist, he is frequently invited by the most important orchestras from Portugal and from other countries, such as Russia, Spain, Cuba, Slovakia, Armenia or Belgium, collaborating with conductors John Nelson, Dmitri Liss, Emilio Pomàrico, Mikhail Agrest, Charles Olivieri-Munroe, Peter Tilling, Rengim Gökmen, Marc Tardue and Misha Rachlevsky, among others.

Filipe Pinto-Ribeiro is the founder (2006) and artistic director of the DSCH – Schostakovich Ensemble, based in Lisbon’s Centro Cultural de Belém. The Ensemble has recorded for Mezzo channel and performs regularly across Europe. 2018 will mark the beginning of Shostakovich Ensemble’s discography, with the world’s first recording of Dmitri Shostakovich’s complete chamber music for piano and strings, on a CD album edited by Paraty label and worldwide distributed by Harmonia Mundi.

Besides his busy performing career, Filipe was Piano and Chamber Music Professor for more than one decade at some Portuguese Universities and frequently gives Masterclasses.

Since 2015, Filipe Pinto-Ribeiro is a Steinway Artist.