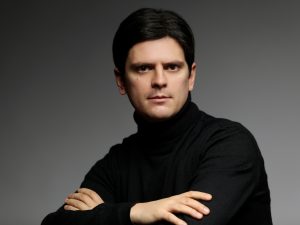 Ivan Donchev was born in the city of Burgas (Bulgaria) in 1981. He began his musical studies at the age of five at the “Pancho Vladigerov” National Music School in Burgas under Julia Nenova. He gave his first public recital at the age of 9. In 1993, at the age of twelve, he won the first prize at the National Piano Competition “Svetoslav Obretenov” and made his concerto debut with Burgas Philharmonic Orchestra.

At the age of 16 Ivan Donchev won the 1st prize at the IInd International Piano Competition for German and Austrian Music in Burgas. Few months later he was awarded a special prize by the “Chopin Society” in Darmstadt and made has international debut at the “Gasteig” Hall in Munich.

Since then Ivan Donchev has performed as a soloist in many European cities and has regularly toured in Europe, Asia, USA and Russia. His list of credits include recitals in New York, Vienna, Berlin, Darmstadt, Kitzingen, Dublin, London, Seoul, Moscow, Milan, Florence, Naples, Palermo, Oradea, Daegu, Yamagata, Montpellier (for the Festival de Radio France), Festival dei Due Mondi in Spoleto, La Folle Journée Festival, San Sepolcro Symphonia Festival, Franz Liszt Festival in Rome and many others.

From 2006 to 2013 Ivan Donchev has studied with the eminent Italian-French pianist Aldo Ciccolini. He has received the “Sorrento Classica” prize from the hands of his mentor and in 2011 they performed a memorable four hands concert at the Fenetrange Music Festival in France.

He has recorded the world premiere of Vito Palumbo’s Quadro Sinfonico
Concertante (dedicated to him by the author) and all Tchaykovsky’s piano concertos. His records are delivered by the labels Rai Trade, Suonare News music magazine, Sheva Collection, Gega New and include broadcasts for RAI 3, Radio France, Radio Classica, BG National Radio and TV. In 2011 Ivan Donchev recorded his highly acclaimed double CD

dedicated to Liszt (Deux Légendes and Harmonies poétiques et religieuses). Very active in chamber music, he has obtained his master degree at “Santa Cecilia” Conservatory of Music in Rome. His Beethoven’s Sonata’s recording with violinist Ivo Stankov has received the 5 stars award from the British magazine Musical Opinion.

Donchev serves on the piano faculty at “Clivis” Academy of Music in Rome. He is invited to act as a jury member in international competitions and regularly gives masterclasses in Asia, US and Europe.

In 2015 he made his US debut at the Kaufman Music Center in New York. One year later he performed in several live streaming concerts the 3rd Piano Concerto by Sergey Rachmaninov.

His 2018/2019 engagements include concerts in Italy, France, Germany, Bulgaria, Russia and South Korea. His last CD “Live in Montpellier” is produced by Bulgarian label “Gega New”.