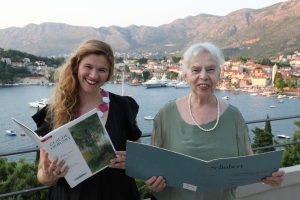 Piano Duo Fantasy was born from mutual love for the music and piano, and was a result of a long friendship. These two eminent Dubrovnik pianists once were professor and a student at the Dubrovnik Art School Luka Sorkočevic: today they are inseparable colleagues and friends. It was exactly the capital masterpiece by Franz Schubert, the beautiful Fantasia for the four-handed piano among the very first pieces they have performed together in concerts. Since then, they have their name: Duo Fantasia.

After her performances with several leading orchestras worldwide in halls such as Sala São Paulo (the first Croatian artist to perform there) or Beethoven Geburtshaus Kammersaal in Bonn, Ivana Marija Vidović has emerged as one of the most distinguished Croatian pianists of her generation. She completed her initial studies in 1991-1992 during the war in Croatia. Subsequently she continued her musical education at the Academy of Music in Ljubljana with Tatjana Ognjanovič graduating with honours in 2002. Further studies with E.Timakin, N.Starkmann, A.Portugheis, E.Indjić, Lazar Berman and from 2005 to 2009 with Alicia de Larrocha. Numerous composers have dedicated compositions to Mrs Vidović. Ivana’s extensive repertoire ranges from Bach to Ligeti. She is fluent in five languages and has published several books of poetry. She was also named an Ambassador of Italian Culture in Croatia and is a laureate of the numerous prestigious awards for her both musical and poetic outstanding achievements.

Dubrovnik’s renowned pianist and teacher Vesna Miletic was born in Vienna. Already in her early childhood she showed great love for music, and soon became a student of prof. Radojka Jordanović. Her concerts were always noted and highlights, particularly those with the Dubrovnik Symphony Orchestra, and later on as a distinguished chamber musician, and as a highly respected accompanist. She studied in Rome in class of the well-known Italian pianist and pedagogue Guido Agosti where she obtained the “Diploma di merito”. In 1975 she became a professor of piano and became a prominent piano teacher at the Luka Sorkočević Music School in Dubrovnik, where she remained until her retirement.