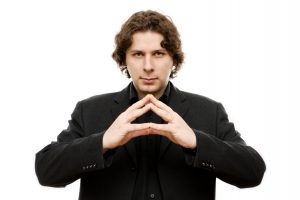 Was born on September 4th, 1981 in Kraków, in a family of professional musicians. He started to play the piano at the age of five under the tutorship of his mother. From 1994 to 2000 he studied at the “Ecole Normale de Musique ‘A.Cortot’” in Paris, in the piano class of professor Marcella Crudeli, and was one of the youngest graduates to obtain “Diplome Superieure de Concertiste.”

He received a royal scholarship of the Queen Elisabeth’s Music Foundation in Belgium for the academic year 2004/2005 to study at the renowned Chapelle Musicale with A.Rahman El Bacha. In June 2005, he received the “Master after Master” diploma, awarded “a l’unanimite.”

His pianistic career started when as a twelve-year old he received Grand Prix at the 4th International Piano Competition in Rome. Since then the pianist has actively performed in Poland and abroad, participating in many important and prestigious music events. He was granted a scholarship of the Ministry of Culture five times, as well as scholarships from Roussel and Amical foundations in Paris and the YAMAHA Foundation Europe. He has participated in master classes conducted by Dmitri Bashkirov, Aldo Ciccolini, Menahem Pressler, Evgeni Mogilevski, Dominique Merlet and Jean Claude Vanden-Eyden.

Marek Szlezer is an active performer of modern music – he has been selected to participate in Krzysztof Penderecki’s music interpretation class, run by the composer himself. He has also premiered numerous modern compositions written especially for him.

His consummate performances of Frederic Chopin’s music have won him numerous prizes: 1st Prize at the National Chopin Competition in Warsaw, 3rd Prize at the Chopin International Piano Competition in Marienbad, a special prize of the Chopin National Edition, and the Polish Radio award at the International Piano Competition “A.Rubinstein in memoriam.” He had the honor to play a concert on Chopin’s original piano at the Jagiellonian University on the night Poland entered the European Union. In occasion of composers 205th Birth Anniversary he has performed a concert at Carnegie Hall in New York.

Marek Szlezer has performed in such prestigious concert halls as Carnegie Hall, Concertgebouw, Wigmore Hall, Palais des Beaux-Arts, St.Martin-in-the-fields, Salle Cortot, Seoul Arts Center, NCPA and Palacio de Bellas Artes. In October 2005, during the opening gala concert for the Queen Elisabeth’s Foundation in Belgium, he performed a Mozart’s concerto accompanied by the English Chamber Orchestra. He has recorded for many TV and Radio stations all over Europe and the Middle East.

In year 2009 he has received a doctor’s degree, presenting a thesis about an unknown polish composer Jadwiga Sarnecka, which piano works he has discovered and edited for Polish Musical Editions PWM. He has been also involved in an editing process of Alexandre Tansman Piano concerto for the left hand which he premiered in Poland in a year 2010. Since 2013 he works also as an editor for Eufonium, publishing important piano works of polish composers dating from 19th and 20th century. He has gave public lectures and performed at such prestigious universities as: Cambridge University, Indiana University Bloomington, University of Chicago, University of Southern California, UNAM, UNICAMP, Federal University of Rio de Janeiro, Royal Conservatory in Brussels.

He has recorded several albums for the recording companies Warner Music, Dux, EMI, Amadeus and Moderato Classics receiving an enthusiastic critical acclaim in prestigious musical magazines (among others Gramophone, Kulturspiegel, The Strad, Fanfare, American Record’s Guide). For the CD’s with music of Chopin, Szymanowski, Tansman and Penderecki he has received twice the French music critics awards La Clef de ResMusica as well as Gramophone Editor’s Choice, 5 du Diapason and various nominations for other phonographic prizes (i.e. Polish Phonographic Awards FRYDERYK). In 2017 his CD has been selected by Hi-fi music magazine as one of the best recordings of the year.